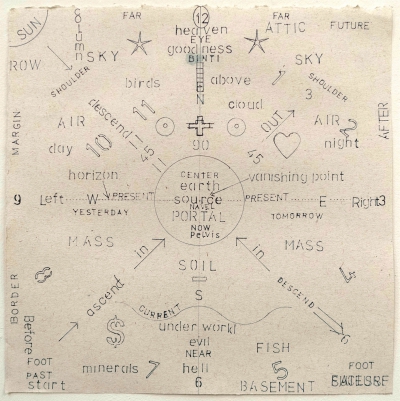 The Power of the Center

In Rudolf Arnheim’s thought-provoking book, The Power of the Center: A Study of Composition in the Visual Arts, he argues that compositional properties describe human experience. For example, the geometric forces inherent in the rectangle, derived from the ways in which horizontals, verticals and diagonals intersect, contain existential meaning.  The process of geometrically dividing the rectangle serves as a starting point for all of my work and offers a broad conceptual space that offers room for all of my obscure and obsessive mental meanderings.  My imagination is triggered and I pull out images, just as one looks at clouds.

I have spent at least the last two decades as an artist exploring the potential of geometry to offer an optically charged mental space in which to explore universal visual language. My work is informed by diagrams of the universe, mathematical configurations, codes and symbols, maps and charts of all kinds, forces in nature like the ebb and flow of water or the waxing and waning of the moon, esoteric manuscripts, and by the work of innumerable artists. I look at the work of untrained artists, of mystics, calligraphers and craftsmen. I love especially the work of Emma Kunz, Andrew Forge, Agnes Denes, Hilma af Klint, Alfred Jensen, and Paul Klee. My love of travel, can always be counted on to inspire new work.

I set out to explore connections between the art, architecture, and landscape of different cultures that transcend time and place. Arabic geometries occur in Shaker drawings, Tantric drawings from Rajasthan resemble both ancient and modern earthworks. Aspects of Renaissance diagrams of the universe seem to appear in the work of psychiatric patients in the Prinzhorn collection museum in Germany. The 18th century astronomical architecture of Jantar Mantar in Delhi and Jaipur upon close examination mirror works by Zaha Hadid. I hope to make connections between things here in the world, with those buried deep in time, and with those found in the back of ones head.

These connections pass through me, informing what it is to paint.  My idiosyncratic process of painting is both accumulative and what I term as “archaeological”. I have come to accept ‘horror vacui’, my fear of empty spaces, as hardwired, but I am also equally aggressive in removing, digging deeply into the surfaces of my paintings. I move back and forth between adding and subtracting, between opposites as I paint, making small moves and large ones, trying to find the right balance and interdependency between the past and the present, between details and the larger structure. As I sand, wipe and scrape to remove missteps, trying to backtrack, I reveal the history of a painting. Often, in so doing, I find a way forward. The ‘pentimento’, or ghost of what was, may remain in the end. What was done first may coexist with what was put on last.

One of my favorite words is ‘enantiodromia’, defined as a principle whereby ‘the superabundance of any force inevitably produces its opposite’. This concept, introduced by psychiatrist Carl Jung, defines what it means to be human and succinctly describes what artists go through as they explore bipolarity/duality in their search for meaning. “The greater the tension, the greater is the potential.” (Carl Jung). Similarly, Maya Lin wrote, “To fly, we have to have resistance”.

A vertical line relates to the body, to how we stand erect, and a horizontal one suggests landscape. I like to imagine that the first cross was a juxtaposition of these two perfect lines, and a juxtaposition of these two most fundamental, yet opposing, natural phenomena.  Industrial designer Henry Dreyfuss’ Symbol Sourcebook catalogues universally accepted symbols according to form and discipline in precisely this way, offering us a core way of understanding how to read and interpret shape and line as well as the fundamentals of symbols from which to invent.

The first set of variables that any painter has to work with is the ratio of height to width. A diagram in Arnheims’ book reveals the forces inherent in that proportion. The center is found by connecting corner to corner. By ‘halving’ and ‘halving’ again and again, a grid emerges, and so on and so on, as the rectangle further breaks down.  East, north, south, west relate to the four sides of the page.  Longitudinal and latitudinal lines are ingrained in my understanding of the space of a painting. Corners represent outward forces. I see a clock in every rectangle, a 3 at the right, a six at the lower edge. Looking at the upper quadrant of a rectangle represents that same experience as looking up at the sky. I imagine the bottom as a burial ground, or the depths of the ocean. The registers in ancient Egyptian wall paintings inspired these imaginings. The sides of the rectangle either crop, as with Mondrian, or contain as with Kunz.

The process of laying down paint, making decisions one to the next about organization, color, space, texture, line and shape, all lead to a moment that seems like a miracle.  The sequential accumulation of seemingly arbitrary choices suddenly feels incredibly familiar, deeply understood, and utterly primal. I am taken out of the here and now, out of the studio and into a much larger universe, almost out of body. I disappear. The painting leaves me and becomes itself.

What makes certain forms reappear over and over again, and why is there still an audience for them? Can they be reconfigured to lend them new meaning? They must be deep in our psyche for I know for certain that the pyramid will never die and will never cease to inspire.